Here in Sweden tv4+ channel is having a "medium training" for a very popular medium show on the same channel. It's a bit like "fame factory" or "idol" or so, people are tested first to see if they have talents and then trained. We are still in the beginning of the testing, of dozens of people 60 were chosen and now they have been limited down to 20. Next episode will reduce the number of the channel's future mediums to 10, and those will be trained in future episodes.

Now, I have been watching this show - basically because I hate the "headmaster" of the "academy" :-D He seems to look down on everyone, and if anyone makes any mistake or talks about things he wouldn't have spoken of, he rolls his eyes, sighs, yawns, raises eyebrows and in other ways shows clearly what he thinks. Two mediums in the jury started talking about the interesting aura one of the contesters had - he was a "witch doctor" and had a dark indigo ring over his head... this "headmaster" interrupted the ladies and said "I don't care to talk about such things".

I have just finished the Celestine Prophecy (and even though I think it's badly written adventure novel, and even worse as spiritual self-help book considered, it made me think certain other things, so it wasn't such a bad experience as I thought it would be) and in it the "control dramas" were mentioned, so I especially looked at the jury dynamics... the headmaster tried to control everything, the two lady mediums had already given in to him, but the fourth member of the jury who is not a medium, totally ignored his efforts to control her... It's so interesting and so blatant I can't understand why anyone would want to be trained by him! It's obvious he chooses people he thinks he can control and who will not outshine him. He got rid of the most promising talents already in the first casting, and now he tried to get rid of a couple more, and tried to get in people who fit his ideas... Thanks to the one woman whom he couldn't control the 20 chosen today are a little better "quality" than what they would have been had he been able to choose all of them.

On the other hand, these people will be trained by him... I'm 100% sure that he won't blink an eye before he does his best to sabotage and bully the people he doesn't like.

But it is very interesting to watch this show... I don't have any "medial talents", but I know how it works. It's interesting how the media in the jury fell for the very same as the "skeptics" - they didn't give one thought of WHAT the medium candidates were "receiving".

For example, there are four boxes and in #3 is a teddybear, a diary and a necklace. One medium-wannabe comes in and says that she sees a church in box #2. Another comes in and says that she feels weird reverence and respect about that box. Well, the box is empty. But I think church and reverence are related. I think there is something these ladies are connecting to. I don't know what it is, but had I been in the jury, I had interrupted the testing for a while and got the first lady back in, so that the ladies together can find out what they were receiving. (Perhaps they were to meet each other... who knows. ;-))

Anyway, the jury media just brushed the ladies off as having no talents, not knowing what they were talking about - after all, they didn't find the right box, they didn't know what was in the box and they couldn't see whose property it was. And the headmaster was miming all through the medium-wannabe's performance... He's such an asshole.

Now, many "skeptic" hate mediums... mediums are phony charlatans, cheating people - because there is no such thing as "life after death", and they are just "cold-reading" and taking the stupid, gullible people's money. Now, no-one knows whether there is life after death or not, whether there are ghosts, spirits, ghouls, what ever. It is always possible that these people are in fact seeing real things, invisible for the most of the people. It really isn't what's important here... what is important is the psychological aspect in this.
If I feel uncomfortable in my home, experience scary, unpleasant things I can't explain or understand, and someone comes to my home, and after he/she leaves the place, I feel comfortable and don't experience the things anymore - it damn it doesn't matter if there were ghosts who were doing things, or if the person used headology and "tricked" me to fix myself...
The same thing with meeting the passed loved ones - it doesn't matter if the medium was cold-reading or discussing with the spirits, if I feel relieved and happy afterwards, the medium has deserved his/her fee.
Or healers - if I heal because I have met them, they have "healed" me, even if they have danced and sang doing it, even if they have given me some weird tea in the side - or even if they have given me pure water and said that it's a miraculous drug that will heal what ever is wrong with me.
Everyone knows that attitude and belief works miracles when it comes to health. In some cases the placebo pill works better than the tested drug. People who WANT to heal, who BELIEVE they can heal, who HOPE to heal, will heal better than people who don't want to heal, who believe to die, who have lost all hope... Everyone knows this. The "supernatural", "parapsychological" is actually quite natural and psychological... people just use different words to describe the same thing. Some people call it God, some people will, some people power of thought... it exists. No-one has been able to prove the existence of thoughts, dreams, ideas, will, wishes and all the other invisible things flashing through our minds, but no-one doubts they exist ;-) 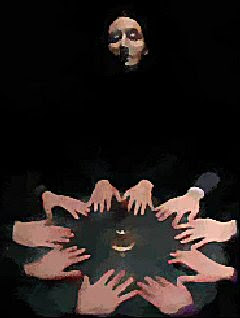