She is the old woman
and the ancient wisdom
She is the fall,
leaves that slowly fall
towards the ground
the Winter
Long sleep
Violence
Tempest
Darkness
the Womb of the Earth
She lightens up the riches of the underworld
She rules over Life and Death
She is the magick
She is the Mystery
She is the power
She is the Fire that burns
around the mountain of death
She is the Queen of the Witches
She is the Skillful
Fearsome
Violent

She is the young woman
the spring
that opens earth's womb
and gives warmth and life to earth
She is the wind in spring
she is the joy
she is the soul of the earth
she is love and lovemaking
she is receiveness
she is fertility
she is the blooming
she is peace, joy and light
she is the creator
she comes from the darkness and
spreads the light.
I used to have a homepage at Geocities, but then Yahoo! stopped the service, and I lost my site. I was a bit sad, because I thought this poem was lost. I wrote it. First part is The Crone, second The Mother and last The Maiden. I hope you enjoy it :-)

I received a comment from a very kind anonymous, and he/she made me very happy :-)
He/she suggested Natural Homes group at Facebook, and there are pictures, links to information, videos... ah. 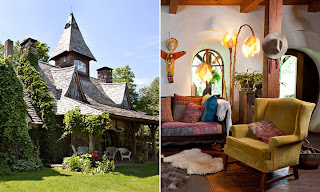 This is Clark Sander's house built of stone... lovely :-)
Then there's this home, which is so hobbit-y and I love it :-D I think I have mentioned it somewhere else, though, but it's worth mentioning again :-D 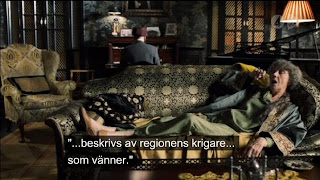 I really, truly hate it when ordinary people are called "goddesses". To me Goddess is the name for a female God. Millions of people on this planet believe their God is feminine. Associating this word to... er... how to put it nicely? Women who have sex for earthly goods... No. NO!
But for some reason, most of the people in the Western society have no problems with this. I suppose they don't think it might be offending to anyone, after all, they believe every other religion except their own is humbug and BS, so there's no need to respect other people's beliefs either.
It could be the fact that most of these people are so used to think human beings are divine, that they don't realize the absurdity of the idea.
But - what ever happened to "do unto others"? I mean, if you think "OMG" is swearing and foul language and "taking God's name in vain", why do you think it's okay to use other religions' "names of God" in vain?

There was a woman in Penn&Teller Bullshit episode "Profanity", Ginny Foster. She said: "...because if you are going to profane a deity, I guess it might as well not be your own."
WHAT?

She said: "The use of profanity degrades society. English is a living language. We have an opportunity to bring it to life. And when we say ugly things, then that living language becomes an agent of death."
Then she goes on saying: "Mork and Mindy is a tv show from a long time ago, and Mork had the best word, shazbot. And so, if you hit your thumb with a hammer, you can say shazbot. My father is a Mexican, so I was around Spanish a lot, so this one word I use when I'm really angry is "santa vaca". If you say "santa vaca", you can really get mad and really blow off some steam, and then you won't be bothering anyone".
Oh? In what way importing swearwords from invented Orkan language or existing wordly languages, like Spanish is bringing English to life, opposing the use of existing English swearwords?

You could say "fan" (Swedish swearword, pronounced a bit like the F-word, except with longer "ah" and -n in the end in stead of -ck. Like "fun" but with long vowel. fu-un. It means "the devil", and is about the worst swearword in Swedish you can use. To me - a Finn - it's about as offensive and ugly as flan, fun and fan, though the long vowel sound makes it a bit silly.)
You could also use the Galactica swearword "frak". It doesn't "mean" anything either... the problem here is that it's not the MEANING of the words that's offensive, degrading, foul language, bad manners and what ever people are trying to say, but the IDEA of swearing.

I have been speaking about this several times, but I'll say it again. Perhaps someone understands some day.
When I grew up, I was the youngest of six, and NOBODY USED PROFANITIES OF ANY KIND EVER. I was over 10 before I even heard a profanity. I didn't get into the habit of expressing my anger with swearing. I didn't get into the habit of expressing my surprise with swearing. I didn't get the habit of swearing just for the "fun" of it. I didn't swear. It's quite enough to express your anger by saying you're angry. It's quite enough to express your surprise with "oh!" Simple exclamations, like "ow!", are quite sufficient when you hit yourself in thumb with a hammer. (Though why would you do such a thing in the first place, is beyond me. I have never hit myself in my thumb with a hammer, even though I have been building things since I was 10.)
NOW I swear like most other people. I was taught by my peers. Am I dumber and less mature as when I was 10? No. It really is just a habit. Might be a bad habit, but as a habit, it's in no way worse than smoking (which actually physically harms the bystanders. Swearing doesn't.) or drinking "diet soda" (which is a habit that harms both you and the environment, and supports a huge company that got rich by selling dirty water to people. Swearing doesn't.)

Ginny Foster's suggestions for "non-offensive swearing": "For crying out loud!", "Shut the front door!", "Santa vaca!", "Oh my gosh!", "I swear to Buddha"...
Well... when you scream things like that, when you scream ANYTHING in frustration, anger, because you think people around you are stupid... you are swearing.
(She also teaches her students that it's the DUTY of the person sitting next to driver, to show handsigns to their fellow trafficants. She isn't flipping the midfinger, she's using both hands. That makes it okay. For some reason, it doesn't even cross her mind, that a) ignoring the other trafficants' hand signs and "stupidity" in traffic would be a more mature, sensible and less offensive way of reacting, and if you now HAVE TO give space to stupid, instant, instinctive reactions, there already is a hand-sign that says it all very well and non-offensively. One hand, palm outward, all fingers extended. It says all kinds of things, like "hi!", "stop" and "talk to the hand"... which, in fact, is very rude. On the other hand, if you are so bothered by what other people are doing, you really need to grow up. YOU. Not the people you are angry with.)

"I'm generally offended by crude language, by language I just don't think has a place among adults that respect each other".
"If somebody swears during a conversation with me, I think they are underestimating my intelligence, or underestimating my opinion on myself. I don't think it's protected speech, and I think that if people are somehow exposed to that, against their will, the government should take action to protect their people."
- Jim Lafferty; Traditional Values Coalition

Jim thinks the Xians should have the "freedom" to attempt to convert non-Xians. I find that EXTREMELY OFFENSIVE AND INVASIVE OF MY PRIVATE LIFE AND MY PERSONAL VALUES. In my mind the government should protect me against fundamentalists like that, who think their values are more valuable than my values. Unfortunately for me, the first amendment protects the Xians' right to exercise their religion freely, meaning, they have the right to try to push their crap to everyone they meet. They don't have the right to force themselves to my homes, though. And the same first amendment also tells the government that it may not create laws to abridge the freedom of speech. So, Jimmy-boy, you just have to do what we have to do, when you come to us with your offensive language and behavior, and walk away.
(BTW, Jim, I don't think anyone is underestimating your intelligence, but everyone is underestimating your opinion on yourself.)

P.S:   I'm more offended by bitch (used of a woman), slut and (w)ho(re) than the C-word.
P.P.S. What the Bible says about cussing, swearing and taking God's name in vain. Really.
Posted by Ketutar at 06:34 2 comments: