"Today, find some way that your husband is serving you or your family. Does he help around the house? Take care of the car? Fix things that are broken? If your budget allows, give him a new, small tool with a big bow attached. But make sure he doesn't think it's part of a "Honey Do" list!
Maybe your husband's not a handyman, but does he run errands for you? Let you go first? Take care of you when you are sick? Help you make decisions? Praise him for his willingness to serve others. Let him know that you see his unique service as a great strength."

Women tend to keep score... and it's score keeping women always "win". The problem with this is that in the end you will feel used and unfairly treated, that he does "nothing" and you do "everything"... and that's not true.

Ok, so my husband is not good at cleaning, and keeping things in order. But he does most of the shopping. I hate shopping. So it's worth a lot for me.

He takes care of me when I can't do that myself, sees that I take my medication, and other such things, and that is a big job, considering that I have fibromyalgia and I hate it, so I "forget" it.

He loves me and tells me all the time how beautiful and sexy and lovely and good and kind and wonderful I am, and that means the world to me.

I think one of the things that is seldom appreciated is that he's faithful to me. He is there for me, when I need him. Because of him I'm not alone facing the world. We are two in this. We are facing the world together, side by side, hand in hand... and because of that he deserves all the praise and gratefulness and love in the world. Frankly... I mean, just think of all the women you see in the tv, with cheating husbands, abusive husbands, no-good husbands... you're not one of them. Thanks to him. That's worth a lot. To me, at least :-)
Posted by Ketutar at 13:37 No comments:

I met my husband 1995. Four years later we got married. Now, after having been married for almost 13 years [the date is 6th of February... 18 days from today :-)] we still love each other, are in love with each other, and like each other and appreciate each other and are proud of each other... We have seen friends move in and out of relationships, but I don't see the end of ours.

So - what makes our relationship strong?

One secret of happy marriage is to understand that what we have is what we'll have in 10, 20 and 50 years. The fairytale of The Beauty and The Beast should be forbidden! You won't change the other, at least not consciously, manipulating, with intention. If you love each other, you will adjust your being to his/hers, and grow together, but the basic nature of each of you will be the one you were created with. This is why you should marry your best friend, and not the love of your life.

Another secret of happy marriage is to understand that people are pretty much the same. No-one is "The Right One", no-one will provide for all your needs and desires, no-one is perfect and flawless, and if you can't live with the faults and vices of "this one", the faults and vices of "that one" will become too much for you to live with too, one day.

Third secret of happy marriage is to get into it with the decision of that divorce is not an option. I'm not saying that you shouldn't divorce your spouse if he/she is abusive or destructive, but that you shouldn't divorce your husband because... well... he snores. He never takes garbage out. He plays videogames all the time. He watches porn. He has the most irritating manner of eating breakfast. He's working all the time. Such little details can be dealt with. Balthasar Gracian said something like "try to get rid of your vices, but if you can't, turn them into virtues".

Also, there was a British tv show about how to train your husband (bring your husband to heel) which was canceled very quickly, because husbands are not dogs. But - the point with it is that positive enforcement works on humans too. We are animals just like all the other animals, and you train all animals best with rewarding them for right actions and NOT PUNISHING them for "wrong" choices. When it comes to human beings, we are intelligent animals and are capable of making right choices if we have the option. So - train your spouse by giving him/her options. Give him/her a chance to succeed in pleasing you. He/she is probably more than happy to do so, if you are willing to do your bit, and work on pleasing him/her.

Also, another thing, my husband has both ADHD and Aspergers, which results in that he's a bit obsessive when it comes to playing video games. He got a new game for Yule, and he's been playing it for the last month. I was complaining a little about being a "Skyrim Widow", and one of my co-workers said that he used to play a lot, but stopped because his girlfriend didn't like it. She thought he spent too much time with the game and not enough with her... so - today he told me that they were supposed to watch a movie together, but ended up with each reading their own magazine... because she read her magazine, and he didn't feel like watching the movie alone. So - she may ignore him, but he may not ignore her? WTF? One secret of a happy marriage is fairness.
I feel often that I'm always doing everything and my husband does nothing, but if we look at what he actually does... I have fibromyalgia, so there are days when I can't do anything but lie in my bed and cry. He brings me tea, painkillers, massages my feet and hand, makes me bath, hot or cold depending on what I want, and does everything he possibly can to make me feel better. I can't imagine my life without him. I can't imagine anyone else who would do that for me.
My husband also cooks most often, he shops, he takes care of the telephone and he does the laundry. He also takes care of all "fixings", like changes light bulbs and such things. So, in my mind he does his share of the household chores. In most families the husband also brings home most of the money. 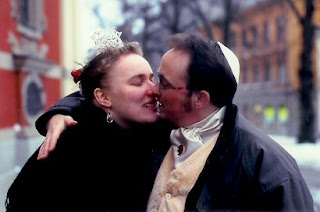