Now I have read the first Percy

and I'm not happy... I mean, I like the book. I think Rick is a great writer. I like the concept of the book and the story. It's his knowledge and attitudes I'm not happy about.

1) the book is telling about a summer of a 12 years old boy. You know, Harry Potter and Chamber of Secrets. My Girl. Stand By Me. 6th grade. Preteen. 12. 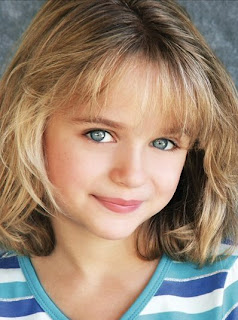 2) I'm rather angry about the misogyny in the deity attitudes in the book.
- Artemis doesn't have children, because she vow to stay maiden. Athena has, and not only one or two, but "a bunch" of teenaged kids... she's been busy. (Now, they say Athena concieves through some sort of intellectual understanding and is still a maiden, but as Annabeth's father says he would not have managed the College without Athena, I can't understand what She ever saw in the guy. Also, he can't wait to get married and have children with some stupid female. Percy's mother is faithful to Poseidon for at least 12 years, marries this guy just because he reeks so he can hide Percy's demidivinity... Now... as we all know Artemis is lesbian. Why doesn't she "father" children with women through this intellectual understanding Athena uses? I suppose the idea is too controversial and scary for a misogynist like Rick Riordan.
- Aphrodite's and Demeter's children might be able to live in the "real world" without interruptions, because they are not that important... I'd like to remind you of that Aphrodite is the mother of Aeneas.
Who, you might say.
The hero of Aeneid.
What?
The national epos of the Romans.
What?
Equivalent to Iliad and Odyssey.
In other words, Aeneas is a "real powerful force". Not some himbo.
- Demeter and Hera (and Hestia) are Zeus', Poseidon's and Hades' sisters. SISTERS. In other words, just as powerful and important deities. I mean... sure, Zeus got the heaven - and control of weather. Poseidon the sea and earthquakes and such. Hades has the underworld and all souls. Hera has marriage and motherhood, the human regeneration and family... I kind of think that's more important than weather. Demeter is responsible for earth and crops. She feeds every human being on this earth. That's more important to me than some occasional earthquakes and tsunamis. It's not Poseidon who brings fish to the fisherman... it's Thetys. The Lady of the Sea, the Ocean itself. Hestia is responsible for homes and hearths. Aphrodite responds for ALL the feelings and emotions, not only love and sex. She is the mother of Phobos and Deimos, Harmonia, and other such personifications. The Olympian ladies are actually more important to humans than the Olympian lords... Is this considered? No. "Less important". "Childless".
Hera doesn't have children because she's the patron of marriage? It was quite a bit different some 3000 years ago, but today more than half of marriages end in divorce and more than half of the people, both men and women, admit having cheated on their spouses, it would be more fair, honest and truthful and less misogynist to allow Hera the same privileges as Zeus has. After all, she IS the Queen of the Heaven, and if Athena gets to sleep around, so should Hera, and all the other goddesses, AND their children should be considered to be just as important as their cousins and uncles and aunts. Now, I don't have children, but my sister and both my brothers do, and my sister's chidlren are in no way less important, talented, significant and powerful as my brothers' children. The mere suggestion makes me angry.
Also, Hera has mothered several children whose father Zeus is NOT... Parthenogenetic? Or is this a question of keeping the father's identity secret? In any case, it is stupid to see Hera has no children.

Also, Poseidon is married to Amphitrite. If Hera doesn't look at her husband's children with other women kindly, why would Amphitrite? She is the Lady of Seas, which makes it rather difficult for Percy to enter the ocean... But - who cares. After all, we have to make Poseidon likable for the sake of the story, and his "love" to Percy's mother something beautiful, and not just some horny old man's cheating of his wife...
I mean... if the 100 years old virgin vampire stalking a 17 years old girl was creepy, what about thousands of years old god fathering a child with a woman 1/100 of his age?
And what we know of his mother is that she quit High School in her senior year (~18) to look after her uncle, who had cancer, and met Poseidon after her uncle died, got pregnant quickly and was left alone to take care of the child before it was even born. So she was about 20 when this happened, I imagine. I find it hard to take middle-aged men seriously, who claim to see some sort of queendom in young adults, and it's even harder when the "middle-aged man" is a Greek god... who should be seeing the queendom of his own Queen, and not in some human child (which a 20-years-old woman would be to him.) Brr.

So considering this indifference about the "good values" of the male gods, it's offensive, hurtful and deeply misogynist to keep Hera childless because she's matron of marriage. Makes me angry.

Nevertheless, I liked the book and intend to read the next book in the series. Let's see how far I can get until this starts aggravating me more than I can enjoy the books. 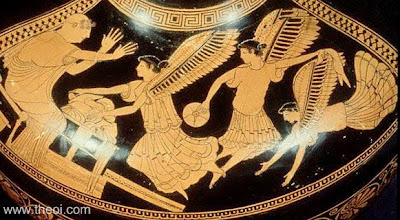 Harpies by people who "knew" them...
P.S. Now I have read the books #2 and #3... Some really bad mistakes. (Helle and Frixos, Rick! Not Europe and Cadmus! Cadmus was Helle's and Phrixus' evil stepmother's father, and Europe his sister. Europe got abducted by Zeus and carried over the Mediterranean and thus she gave name to the continent. Helle just gave name to Hellespont which was the place where she drowned as she fell off the ram. That's unforgivable, Rick...)
In book #4 he's getting very close to insulting Hecate. I don't know if I can get over that, if he does. I hope he doesn't.

P.P.S. Something related: True Blood: conflating the Dionysian cult with Satanism
Posted by Ketutar at 13:47

I've read the first four PJ books, and I have to say, this is one of the more interesting interpretations of them I've seen. What are your thoughts on the character of Annabeth, seeing as she's probably the most prominent female character?
What I had trouble with was the sheer amount of young demigods running around. You get the impression that the Olympians get up in the morning, get dressed and immediately go find a human to impregnate/be impregnated by. Even after the 'Big Three' actually agreed not to have any more children because it was causing too many problems, only one of them kepy to this promise. I mean, have they never heard of contraception?

"have they never heard of contraception" LOL
Exactly :-D

What do I think of Annabeth? Well... I like her. :-) I suppose that's one of the reasons I managed to read the books and continue to the Roman series :-D And in many ways he does get better... and in some ways worse. I think I have written about that somewhere... Uh. Doesn't matter.

What do you think?

No, Sweetie, it's not. Why would you think it is?