"When starting your garden seedlings indoors, plant the seeds in egg shell halves. Crack the shells around the roots of your plants and transplant them outdoors. The shell is a natural fertilizer."

That's a great idea! I'm starting to save my breakfast egg shells :-D Let's see how many I need...

I don't have a farm yet, I live in a high-rise and have a balcony and a couple large windows. I didn't have the energy to plant anything this year :-( But I have balcony full of pots, just waiting to be filled :-D

I want tomatoes and paprikas. Especially tomatoes. Chili might be a good idea.
It would be nice with pumpkin, but the big halloween pumpkins aren't recommended to be grown on the balcony. Pumpkins need a lot of "food" and water, and that is not a good idea for a balcony...
I would like carrots and other roots, but those aren't too rational to be grown on balcony either... I suppose I need to go back to Mommy and borrow some land from her. I suppose if I do the spring work, making the benches and planting the vegetables, she will be ok with watering them during the summer, especially if I do her garden too :-D
Strawberries I want, and I also want one of these pots with many holes :-D I know strawberry pots are practically a really stupid idea, but I like the look of them. Here's a great idea of how to "replace" that with what we have :-D (It would be stupid (for me) to start growing bilberries (huckleberries?) and lingonberries on the balcony, as we have forest full of berries nearby.)
I want some lettuce. That is so quick and easy, I could grow some this summer too :-D
What I really want is herbs.
And black flowers! I love black flowers :-D

Anyway... I was looking for growing things in pots and found "cardboard columns for leaf vegetables" - a little more down there were cardboard houses... Someone came up with the bright idea of using wastepaper instead of straw in cob... and I was lead to a whole different strain of thought :-D 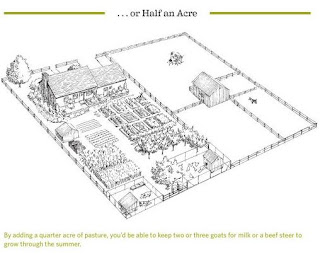 From "The Backyard Homestead" - 1/2 acre homestead :-D
My mother owns about 10 ha in Finland. I'm sure I could get one of them (that's about 2 1/2 acres) and produce all the vegetables for me and my husband, and even keep some animals. I could also "borrow" some of her land to get winter food for my animals :-D

Anyway, the house has been a problem. I want a Victorian house, but building materials are very expensive and I don't have the know-how. But another thing I LOVE is the English cob cottages with thatched roof! 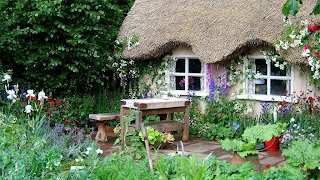 I didn't know they are cob cottages. I thought they were brick houses. I cannot afford that, but cob can be made of... anything. *_* Which means, I can BUILD my own "English country cottage"!

Now, Finland is not England, we have the snowy winters and short summers of continental Northern countries, but I suppose this house would manage that too. It doesn't need to be big, we really don't need more than we have now, which is 60 square meters (about 650 Square feet). I have lived in a house without plumbing and it's not so bad. What IS a surprisingly serious problem to me is that my mother doesn't have the fiber optic line for internet. My husband would go crazy in two days. :-D (And so would I ;-))

Back to cobhouses. We both love the hobbit holes, and this would be the perfect way of building one :-) That little miniature model of a hobbit hole looks very much like I'd like it :-) A big kitchen with a hole in the floor to cellar and a big pantry; like the one Laura got from Almanzo... A little entré, living room, study and bedroom and a small bathroom.

Perhaps the first year I could put the whole area on long-stemmed winter wheat, to get the straw for thatching ;-)

Oh, yes, I'm hopelessly optimistic, ignorant and inexperienced when it comes to things like this :-D It would probably take way too long to build a big cob cottage the way I think... but - as long as my living situation is what it is, these are just dreams and as it is now, will never lead anywhere.

Take a look at - http://www.simondale.net/house/

You could also join http://www.facebook.com/naturalhomes if you have facebook for more inspiration.

Hope you make it.