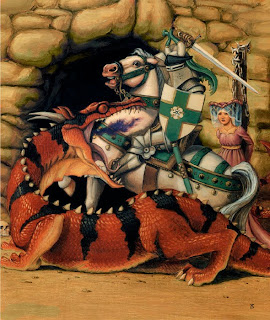 I have been trying to start discussions about some of the nasty rhetorics I have been subjected to lately here at Gaia, without talking about me, without making it personal, because I simply assume that people are not singling me out, that the world is not after getting me, specifically, that others have been treated with the same, unfair, devious, insinuating, insincere and passive aggressive bullying tactics, and I have been sharing some information that has helped me a lot in dealing with that.

The response I have received is... well, to put it simply bad. There has been only two guys that have given me thumbs up, the rest has been...
I mean, I have tried to understand this integral synchronisity new world stuff, and one thing everyone is SAYING is that the intentions are all that matters, that I will receive what I put in the world, and then they are treating me like shit when I try to help?

Someone said I was calling people names, being cruel and poisoning the world with my words, and a respected member of the community told her she put her finger exactly on the problem here... So I am the problem here. This person claims to love me! She says I'm a hypocritical, namecalling troll, but she so loves me. Frak her and her love! May Goddess protect me from love like that. But sure, she is all innocent, and doesn't mean anything and hasn't done anything wrong and doesn't understand how I can be so hateful when all she does is love me, and the whole fraking community believes her, and joins the battle against dragon me.

I have spent a lot of time trying to be a princess, because they always got what I wanted, but the truth is that I am a dragon. And I like being a dragon. Dragons are amazing. Strong, beautiful... but it's not easy to be a dragon in humans' world. I'm always wrong, always ugly, always intimidating, dangerous, need to be put in my place... Jantelaw all over, again, even in here, where I thought I could find a refuge, because people were being talking so highly of important things like respect, love, tolerance, peace and harmony... but they don't mean what I mean with these words.
Respect is something people expect to get, not something they expect to give.
Tolerance is a swearword including intolerance.
Diversity is something bad because everyone should be like angels singing OM and trying to be better, according to what they think is better.
Love... love is a duty, something people are suppose to feel to everyone, and it has nothing to do with that warm, fuzzy feeling inside, that makes you glad to see the other one, that makes you happy of having the person in your life, that makes you feel good and like yourself, when you are with him...
All these words that don't mean what I thought they mean.

You know what? Frak you. How the heck would anyone believe in the new world order you are trying to sell, when it is painfully obvious that you don't believe in it yourself? Of course it's "so nice" to be bashing everyone around you with the principles, but when the principles are such as "law of karma" and "you sow what you reap", "what you send out comes to you", why are you not getting the crap you dish out to me and certainly to the rest of the world, as I'm not anything special.

It's like... I must have been a really horrible person in my previous life. :´D

To quote a friend of mine:

Apparently you are like catnip to cats with people. […] they STILL chose combat with you.

I know it's not any consolation, Ket, but try and see it as a compliment - they are so intimidated by you that they have to try and put you down.

They are also projecting heavily. If they can make it about you, they won't have to adjust anything or, G-d forbid, admit that they might be wrong.

They speak high and low about being here to learn, but they don't think they have anything to learn.

Yes, it's painful, very painful, it's spirit crushing, and all I have to offer you is a hug and the sentiment that I think Dragons are beautiful and very wise Creatures, I hope it helps a little

lol
soooooooo glad i haven't bothered to look up this latest drama
the comment on the who's better than another one, shows how full of love and growth people are that they feel so insecure that they have to jockey to be so involved and 'show' how great they are…if no one sees me type love, then who will glorify me in a bliss ninny way and support my high? (yes that was a slam)

The other end of that is, why care, it's the internet. Why do some push so hard to be accepted in a space where others are signaling they are not welcomed? I suppose each person is ok doing what they like in their own living rooms. Online, people can exhibit that living room scenario, but with free and open internet space(rather making ASSes…oh *cough assumptions, that everyone knows it and HOW dare they behave otherwise…defend my turf dammit! pees in corners).

In a general way with the extremes of self expression going all the way to bully by physical force, each person that has had to fight to express themselves and rid themselves of what they might have felt as oppression–no matter the reality of it, will fight with teeth bared and claws out. And then type, respectfully with love.

My family loved me enough to burn my hand on a griddle. They told me they loved me and needed me to know why they said no to touching it and then put my hand on it flat and held it there. Love is a word. Energy is energy, it cannot lie. Doesn't matter how many books one reads, seminars one attends, teachers, gurus and rolex watch collectors one worships, we are still who we are on the inside of the wrapping paper.

If it is a dragon that you fashion yourself of, my friend, then by all means be the very MOST of this dragon that you can be, with all of your heart, your might, your all. By doing so, you are the reflection of that which you worship as your Goddess. I would like to offer my portion of healing to you in this post here, sending it your way as I write this to you specifically. May the wounds be already healed as you receive this. So be it, my friend.

Here's how to do it:
http://tinyurl.com/y9bz8ao

For USonians. The rest of the world has to adjust the advice to themselves. There are ways to do this, where ever you live, and "wasting" one day to find out how, calling companies and writing to people is worth it. The Western society uses tons of paper to print this crap, and nature to print, distribute and waste this crap.

Now, if you think it might be good to get the ads and what-nots home, here's
50 things to do with junk mail

Mayan Calendar and other things.

I apologize to all who has left comments - I don't get them home, I don't know when anyone comments, so I haven't been responding to comments. I'm sorry for that, but I think I know now where the problem lies and can correct it :-)

I am reading another of these "must read spriritual books" - this one Carl Johan Calleman's Mayan Calendar, and there's a lot of thoughts in my head.

He says that it is a pity that we "ignore" "half the world's" knowledge when we create our world view. "Half of the world" being Meso-America and specifically the Mayans. Rest of the world being the "Western world", that is Western Europe and even more specifically the Greco-Roman world view, with some flavoring from the Jews, Egyptians and Babylonians, and spread by the Anglosaxons, French and Latinos. 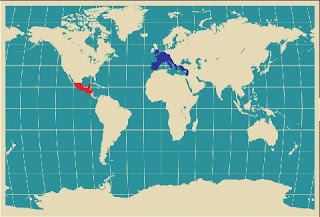 World according to Calleman - in red "Western World", in blue "Eastern World"
I suppose there's somewhere a slight acknowledgement of the other Native American peoples, but their wisdom, knowledge, science and culture is seen as "basically the same" as the Mayan, besides, they didn't write anything down, so one doesn't need to care about them.

Some people seem to find it offensive that the scientists try to find the birth place of humankind. Following the markers in our genome, this place is in Africa. From Africa, the people spread all over the planet. Every today living human being has an African ancestry.
We spread over the planet and created us a life according to the special requirements of each living place. The aborigins of Australia did it their way, the Mayans did it their way, the Samic people of Northern Europe did it their way. Everyone looked around them and created a wonderful mythology explaining why things are the way they are, and everyone has their own culture based on the results of their research. Every people on this planet has a rich and wonderful spiritual knowledge that could be useful to anyone. I just happen to believe that we all are born where ever we are born for a reason, and one part of that reason is to go to our own culture and learn that way.

The Mayan had knowledge of zero. They had probably inherited that from Olmecs. There is no signs of any other use of zero anywhere else in the American continents.
In Asia they had knowledge of zero long before the current reckoning as well, but they spread their knowledge.
We know that the Indians taught zero to Muslims, who brought it to Europe.
We know that the Greek were very uncomfortable about the concepts of "nothing" and "void" and therefore also zero. They thought that there cannot be nothingness and eternity at the same time.

I am very fond of nothingness. The most important wisdom in the world is "I am full of crap and know nothing".
Posted by Ketutar at 12:18 No comments: