Ostara is in three weeks

I have been playing. Absentmindedly I doodled on Ostara and "invented" two interesting countdown calendars. Now I just need to make them. :-D

I am planning on having a dinner party. Like Christmas, except on Easter. And, yes, it will be on Christian Easter, 10 days after the Pagan one.

I saw these cute little decorated matchstick boxes. I love the rich effect of piling the stuff on it :-D That would be a nice favor. Now... what to put inside... Hmm... My sisters are easy, but guys...What do you give to guys that is that small? 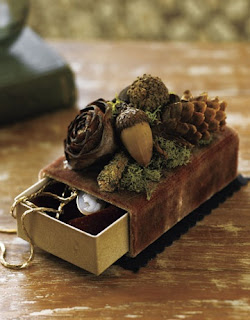 I suppose I could take the easy way out and give them a scratch lottery ticket. *sigh* It's really impersonal.
But... a memory card for PC, camera...? Maybe a movie on it? Good idea, but too expensive.

So - off to planning the party and some other things :-)

P.P.S. I'm worried about the entertainment... Half of my guests would not be entertained by things like easter egg hunt, which I would think wonderful. Most of the guests will not sing either. *sigh*