You will need:
as many bingo calling cards as you have players, and one for the caller
some blu-tack or pins and corkboard or some other such, to keep the cards in square for playing. (read the whole instruction to understand.)
15 markers for each player. These could be nuts, for example. 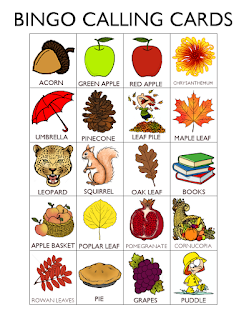 Cut all into squares.All the players and the caller mix their squares in front of them, picture side down.
The players pick 16 cards and arrange them into a square, which ever way they like.
(If there are some kids who like to copy someone else, let them arrange the square in the order they pick them up. In four rows, four cards in each row.)
It might be good to have some blu-tack to tack the cards in the square, so that they won't get mixed during the game
Caller turns over a card randomly and calls out the picture.
Any player with that image, lays a marker on top.
Play continues until the some gets four in row in any direction including diagonally and shouts out BINGO!

(You can, of course, adjust the cards to your own symbols and traditions. This is mine.)
Posted by Ketutar at 14:22